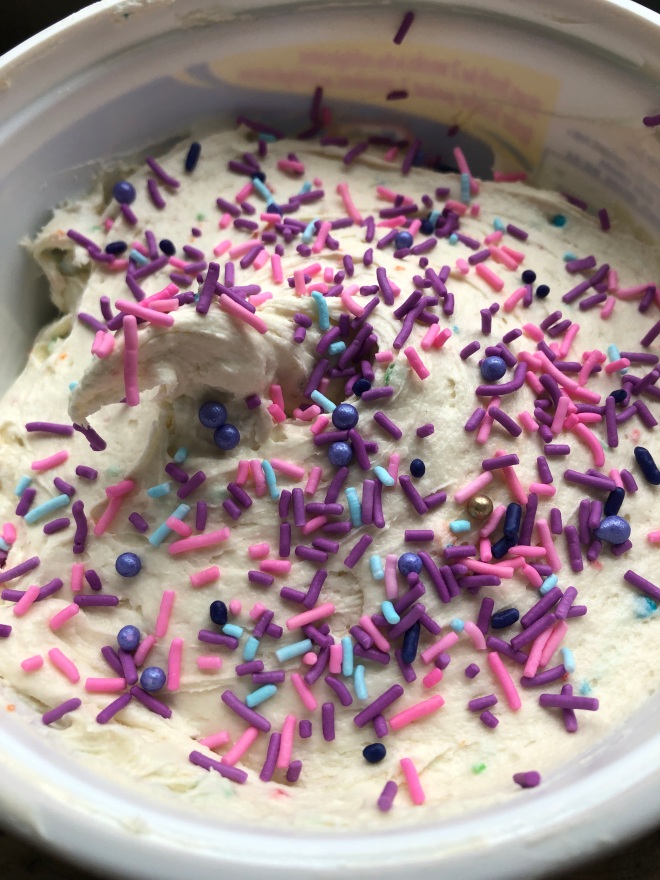 (also known as funfetti dip, homemade dunkaroos – seemed like a great thing to make for my 5th week of 52 new things in 2022 project)

Recently in a Facebook group someone posted about Dunakroos being back in stores. I honestly had no idea they weren’t being sold anymore so was surprised/not surprised and also curious if you can just make the dip part of Dunkaroos. A quick search and I discovered that yes, of course you can.

So a few things before we get started:
First: In case you don’t know what I am even talking about, Dunkaroos were a lunch box treat that popped up in the late 80s (at least in my world) and were individuals packages of an animal shaped cookie, presumably shaped like kangaroos, and some cookie icing type dip.
Second: If you don’t like things made from a bunch of prepackaged and really not very good for you products, probably just stop reading this and come back next week for something less sugary.
Third: I am not suggesting that you send this to school with your children. But also I’m not the boss of you so go ahead and do what’s right for your family.

My search for a suitable recipe delivered a lot of different versions. Some involved cream cheese, some had vanilla pudding, some had vanilla yougurt and others had plain yougurt. They all had two ingredients in common though: funfetti/rainbow bit cake mix and a tub of cool whip.

I decided to go with the simplest of all the recipes.
Here’s what you need:
1 Tub of cool whip
1 Box of Rainbow Bit cake mix (This is the Canadian version of Funfetti Cake mix, or at the very least the version of Funfetti available in the stores in the Okanagan).
2 snack packs (individual packages) of Vanilla Pudding

Here’s What You Do
Mix the cake mix and the cool whip together. I used a stand mixer because this combination makes a really thick batter, really thick. I actually started with a hand mixer and had switch to the stand mixer. If you don’t have a mixer just be prepared to stir a lot.

Once the cake mix and cool whip are combined add the pudding. Start with just one package, blend and sample. If you feel it needs more vanilla flavour and/or is too thick, add some more pudding.

You can also add more sprinkles if you want. From looking at people’s Funfetti Dip recipes I feel that Funfetti cake mix might have more “Fun” in it then the Rainbow Bit mixes that I could find. Adding your own sprinkles would also let you customize the dip to different events or holidays.
I bought some Animal Crackers for this time but Teddy Grahams or Social Tea type cookies would work as well.

Honestly this dip is mostly just sweet – there’s not a huge amount of flavour, but who doesn’t love dips right? I can really see this as a great snack to throw in a pack for a cross country ski day or a hike in the spring or fall when you need a hit of sugar to keep you going/help you celebrate.

New bike day!!! Second hand Schwinn but still had all the stickers on it ❤️
One of my favourite areas on the garden. These plants spread here on their own & are doing so well. Looks can be deceiving though….this beautiful corner is growing right next to my composter 😆
Water dog doing what a water dog does.
First festival since….(well you know) Maplefest is this weekend in Kelowna, celebrating all things maple & French Canadian.
That’s was a pretty successful synchro competition for team Gardiner-Paradis 🏆
That was a good weekend.
Loading Comments...
%d bloggers like this: